When NYPD Officer Larry DePrimo bought boots for a homeless man who had blisters “the size of his palm,” he never expected anything in return. But now that a photo of the cop’s act of kindness 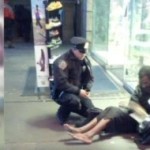 has surfaced, the Internet is swelling with praise for the do-gooder.

DePrimo had no idea that an inspired passerby was taking a photo as he knelt down to put a pair of boots on a homeless man’s feet on Nov. 14. But after the tourist photographer posted the tender moment to Facebook, it quickly went viral, garnering more than 400,000 “likes” and celebrity status for DePrimo.

As DePrimo now makes his way around the talk show circuit, he’s been sharing the simple impetus of his good deed.

“You could see the blisters [on his feet] from 15 feet away,” DePrimo told CNN of the man who was shivering on that November night in Times Square. “I knew I had to help him.”

DePrimo went to a nearby Sketchers store to buy a pair of thermal socks and $75 insulated winter boots, the Associated Press reports.

Jennifer Foster, the tourist from Arizona who happened upon the moving scene, said she was so inspired by what she saw that she had to capture the moment.

“This man’s face lit up like it was Christmas and like, he had just been given, literally, a million dollars,” Foster told the Today Show.

Foster told CNN she was particularly inspired because DePrimo’s action reminded her of witnessing her own father, who worked in law enforcement, give a man in need breakfast in a donut shop.

While DePrimo continues to get praise from impressed fans online, he’s also getting attention from politicians and higher-ups in the police force.

The New York Times reports the police commissioner gave DePrimo a pair of cufflinks in recognition of his good deed, and Mayor Michael Bloomberg tweeted that the officer’s story is an “an important reminder to give back this holiday season.”

Even more valuable than the thousands of “likes” and the attention he’s received, DePrimo said, is how his small act could galvanize more people to help.

“It’s a lot about the people,” DePrimo told the Today Show. “You see just great comments. People are saying their faith in humanity is restored and that’s the biggest thing I can take away from all of this.”